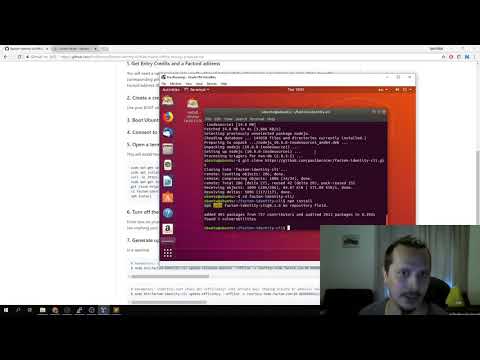 This tutorial will guide you through the process of setting your coinbase address and node efficiency. If you've followed the previous tutorials you should have a system with Factomd running as well as a wallet with some Entry Credits in it.

First off you will need two USB flash drives ready.

Additionally, you will need your Factom identity information ready:

Then, boot Ubuntu 18.04 from the BOOT stick and connect to the internet.

Open a terminal and run the following commands (this will install node.js 10 and the factom-identity CLI):

Now turn off the internet connection. From now on your Ubuntu should never get connected to the Internet. You can double check by typing ping 8.8.8.8, or you can unplug your wifi/Ethernet if you really want to be sure.

Proceed by generating the update scripts by running the following in a terminal:

Be sure to replace the parameters in the command above with your own:

Be sure to replace the parameters in the command above with your own:

Those two commands will create two scripts, if successful:

<short_id> is the short id of your identity: the first 6 characters after the leading 888888.

Copy these scripts to your DATA stick, eject it and shut down and destroy the Ubuntu session.

Important: the scripts generated contain timestamped data which means they have a limited time of validity. You must execute the scripts within 1 hour of their creation to be certain that the entries contained in them will be accepted by the network.

Continue now on the previous system you were working on and plugin the DATA stick. Locate the files and make sure they are executable:

The scripts simply use curl command lines that should be available on most unix based systems. The scripts will make the requests to the Factom Open Node (https://api.factomd.net/v2).

You can edit the scripts to choose another endpoint by changing the HOST= parameter at the top to localhost or a test-net node for instance.

After executing, the scripts should output success messages if done correctly. You can check in an explorer that your identity root chain and server management subchain have been updated after 10 minutes (next block).

Finally, format the boot stick, or even better, do a secure erase with specialized tools.

Previous
Generating your server identity
Next
Joining the docker swarm