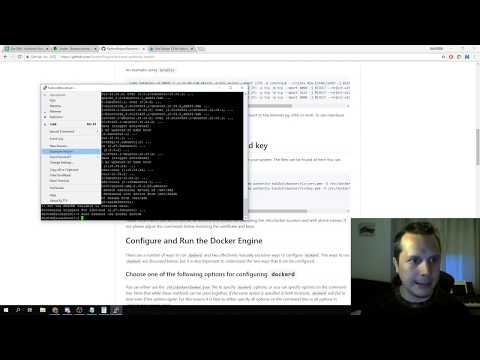 This tutorial is fully covered in the video shown above. Some parts may differ from the text version, such as the swarm certificates and keys, these have been updated since the making of this video.

Make sure you logout / login again, as otherwise your current terminal session will not be updated.

The Docker Swarm certificate and key is used for authenticating with the docker swarm. These will verify clients with the certificate, as well as encrypt communication with the Docker API using TLS.

If you're trying to join the test-net swarm the keys can be found here.

You can store these files in the directory /etc/docker for instance:

Now you should have the files with the correct permissions set.

Please note that in the rest of this tutorial it's assumed you stored the files using the /etc/docker location and with the above names. If not, please adjust the commands below involving the certificate and keys.

Configuring and running the docker engine

Configure the docker daemon using a default config file, located at /etc/docker/daemon.json . Create this file if it doesn't exist. Copy the following into the file:

If your system has multiple IP addresses you can select which IP it should listen on by editing "hosts".

The above command creates an override directory at /etc/systemd/system/docker.service.d/ and an override file called override.conf (which is open on your terminal now). Copy and paste the following:

Exit and save the file. Now reload the docker configuration and the docker.service:

Docker should now be configured and ready. You can test if it runs correctly with the following:

It should restart with no errors appearing and you should see that the override.conf file has been loaded.

Factomd relies on two volumes, factom_database and factom_keys. Please create these before joining the swarm:

These volumes are there to make sure that you can remove or delete the container itself but the database and the keys are still persistent on the system.

For running a main-net authority node we strongly recommend syncing the database from scratch. If you do already have a recently synced main-net node and would like to avoid re-syncing, run:

The directory in _data after the copy should be main-database, as the volume is mounted at $HOME/.factom/m2.

Finally, to join the swarm, run the following command:

As a reminder, joining as a worker means you have no ability to control containers on another node.

Once you have joined the network, you will be issued a control panel login by a Factom employee after messaging one of the Factom engineers on discord. You should private message the following for each node:

Only accept logins at federation.factomd.com. Any other login endpoints are fraudulent and not to be trusted.

Please note: There is a version for the Factom software in the next command. Make sure you run the correct and latest announced version from the Discord #operators-announcement channel

If you want the Factomd container to start at system boot (reboots) you can add the following parameter to the command above:

After this your node will be started. You can check for the existence of a Factom container using the command docker ps .

You're now almost ready to be included in the main-net. Stop the factomd container with docker stop factomd and download the factomd.conf file here.

There are some required edits that are needed, among them you're required to enter a few special peers here. You will get more information about this if you're accepted as an ANO.

Now you're free to start the factomd container again with docker start factomd .

If you check the currently running docker containers you'll see a container named factominc/filebeat:m3-debug , this is generally a good sign as it means the portainer system has successfully connected and started a container remotely.

Please wait for your node to be fully synced by checking the control panel node sync statuses to be 100% before performing any next steps. Please also regard the initial wait period of 20 minutes before doing anything with your node. Also note that the factomd:v6.5.2-alpine version may have changed since the time of writing.