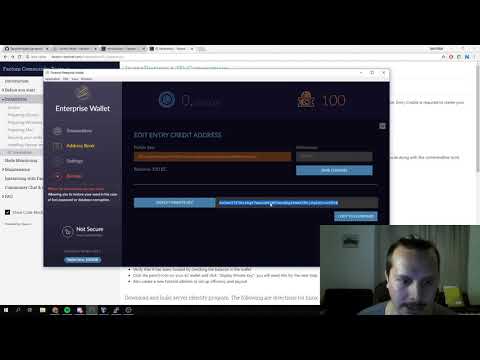 This tutorial assumes that you've setup Ubuntu that is running the Factom Daemon. If you haven't, please check out the getting started with the basics tutorial first.

You can check if the daemon is up by running docker ps . A container with the image factominc/factomd:vX.xx should show up where vX.xx is your current Factomd version.

Latest version of the Factom Daemon can be found here.​

Furthermore you will need Entry Credits to create your identity to the blockchain, so make sure you have at least 24 EC in your Factom wallet before moving on with the tutorial.

Lastly, it is highly suggested that you have two USB flash drives ready:

The keys generated as part of this tutorial are highly sensitive, do not EVER share any of the keys you hold or generate. Losing these keys means you will lose your server. Keep these secure and safe, preferably written down on a piece of paper.

Thus, doing parts of this tutorial on an offline computer greatly reduces the risk of these keys being compromised by either key loggers, screen capture software, viruses or by other malicious means.

The identity is generated using the serveridentity tool, but first you need to build said tool.

next up edit ~/.profile with for example nano:

and add the following lines to the bottom:

Open a new terminal for these changes to take effect. You might even need to re-log.

Next up clone the serveridentity tool:

Now you should have two files in the go/bin/folder named serveridentity and signedwithed25519. These are the files you need to generate your server identity.

Copy the files serveridentity and signedwithed25519 into your USB DATA flash drive and continue the process on your offline system.

For the next steps you will need some Entry Credits as you'll be storing your identities on the blockchain itself.

First, make sure the files are executable:

This will generate numerous keys which are printed to stdout, two files will also be produced:

Write down the keys that are printed in stdout and copy the two new files to the DATA stick, eject it and shut down and destroy the Ubuntu session. Continue the tutorial on your server again.

Copy your fullidentity.sh file to your server, make it executable and run it. Make sure signedwithed25519 is available on the system.

Your server identity chain is now generated. You can now paste the contents of the important.conf file into your factomd.conf, normally located at /var/docker/volumes/factom_keys/_data/factomd.conf

Previous
Getting started
Next
Setting the coinbase address and node efficiency